I always enjoyed reading or watching those "behind the scenes" articles. So if you’re like me, here’s a brief look at how "The Castaway Pirates" came into being.

Between 1980 and 1990 I had worked on about 24 interactive books for children before I took a brief 20 year break after becoming distracted by the Macintosh computer. One day my daughter asked me if I was going to make another pop-up book. As she wasn’t even thought of back then I thought it would be a fun thing to do again and so I began thinking of some concepts.

One such concept was to develop a pop-up version of “The Green Grass Grows All Around.” But somewhere along the way the notion of “The Gray Sharks Swam All Around” came about, and I thought “swam around what?” Ah ha, a drifting raft! And then, as ideas have a habit of doing, it evolved into a story about a ship of pirates marooned at sea by a storm and left adrift in a leaky row boat – with just a menacing shark for company!

Now I was adrift! Without actual words for my story I had to write my own which was never my intention. I still liked the idea of a rhyming story and it occurred to me that the pirates could use several ridiculous ways to try and contain the leak until finally there is no hope, and they have to join the shark in the water. Being a big fan of old English folk music I liked the notion of developing a sea shanty style of writing which became the “hook” on each page.

And now a twist. When I started working on the book’s concept it was definitely going to be a pop-up but as I went along I had another thought. I had been exploring three-dimensional illustration software, the type that Pixar would use for their movies, and I thought “well why not build little moveable pirates and position them into different poses for each picture and render (take a snap) each one inside the computer, and drop them into the book. "How hard could that be?!" As I went through this process I felt this was far more interesting than making a pop-up book and so I dropped the pop-up book idea!

I thought the best way to get my book noticed by the publishers was to borrow the “coming soon” approach from the movies. So a week before I was planning on sending out my mock-up book I sent a flyer in a FedEx box announcing the important day (well, it was to me!). The following week, as promised, I sent out three book mock-ups packaged in a red velor bag with a leather patch holding it closed. I also included some appropriate “Barbary Bribery” – chocolate coins with custom gold foil wrapping. And then I waited. Finally I heard back from two of the three publishers that I sent the books to – “Sorry!” Publishers are actually very good at writing rejection letters!

And then serendipity took control. I received a call from San Francisco publishers Chronicle Books, about a separate project. I mentioned that I had this book that I wanted to send to them and they said “Well bring it to the meeting!” It was amazing that I was going to walk my book into a publishers meeting! I remembered also to take along plenty of “Barbary Bribery.”

A few weeks letter I received a letter from one of Chronicle’s children’s book editors saying that the bribery had worked, and that Chronicle wanted to acquire my book! However, there was one small twist. They would like to use a different illustrator and that they would like the book to be a pop-up!

Chronicle already had an illustrator called Wilson Swain in mind for the book. We all got together to discuss how we would turn my 32 page picture and text book into a pop-up book. Wilson arrived with initial sketches of my characters refined in his own style and I brought two early pop-ups.

Wilson was a wonderful choice for the book and provided some great suggestions for the continuity of the book. I don’t think he had any idea what he was letting himself in for! Illustrating for a pop-up book means having to understand how all the separate pop-up pieces fit together, and then draw them all separated – FOR BOTH the front and back of each piece! Wilson did an amazing job of being thrown in at the deep end of this process.

We started the process by Wilson preparing some initial sketches of how he would illustrate each spread if the book were a regular picture book. With each spread we would decide what the main pop-up focus would be, and then I would prepare some rough mock-ups based upon Wilson’s sketches.

Once I had a mock-up that seemed to work well I would draw loose dielines in the computer for Wilson to draw within. Dielines are the lines that a die-maker follows to make the cutting blades (dies) for the pop-ups. Wilson would then create his initial sketches, scan them, and then email them to me. I would then refine the dielines accordingly. Sometimes we went through this process a couple of times until we were both happy with the result. When all the details had been finalized Wilson would begin painting the final artwork and again email me the electronic scans. These scans were then placed together with the final dielines and the electronic file sent to the printer.

The next step in the process was to review blank mock-ups of each spread, cut out and assembled by the printer. The printer also sent us printed copies of Wilson’s artwork on large proof sheets for us to check the color. When both were approved the printer then produced advance color mock-ups from the proof sheets prior to final print production.

Then it was time to sit back and wait for final assembled copies of the book to arrive!

Ray's pencil sketch for the first storyboard of "The Castaway Pirates".

Rough mock-up for the "Use the Shoe" spread.

Wilson Swain's sketch for the "Use the Coat" spread.

Early rough mock-up of the shark.

Ray's rough mock up for the "Make For Shore" spread.

Dielines for part of the "Make For Shore" spread. 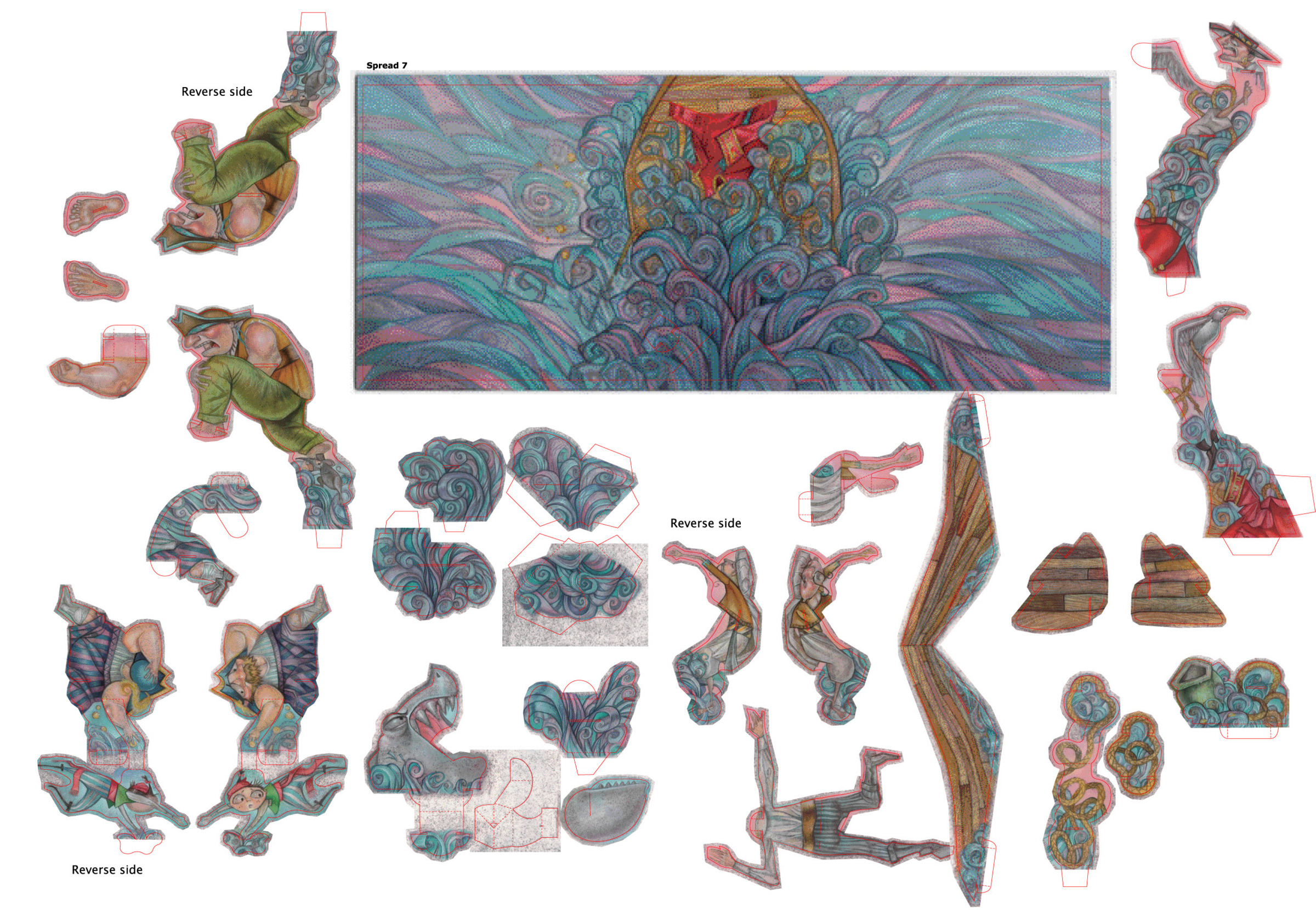 All the component pieces of final art laid positioned with the dielines.